An Open Letter to Rachel Maddow 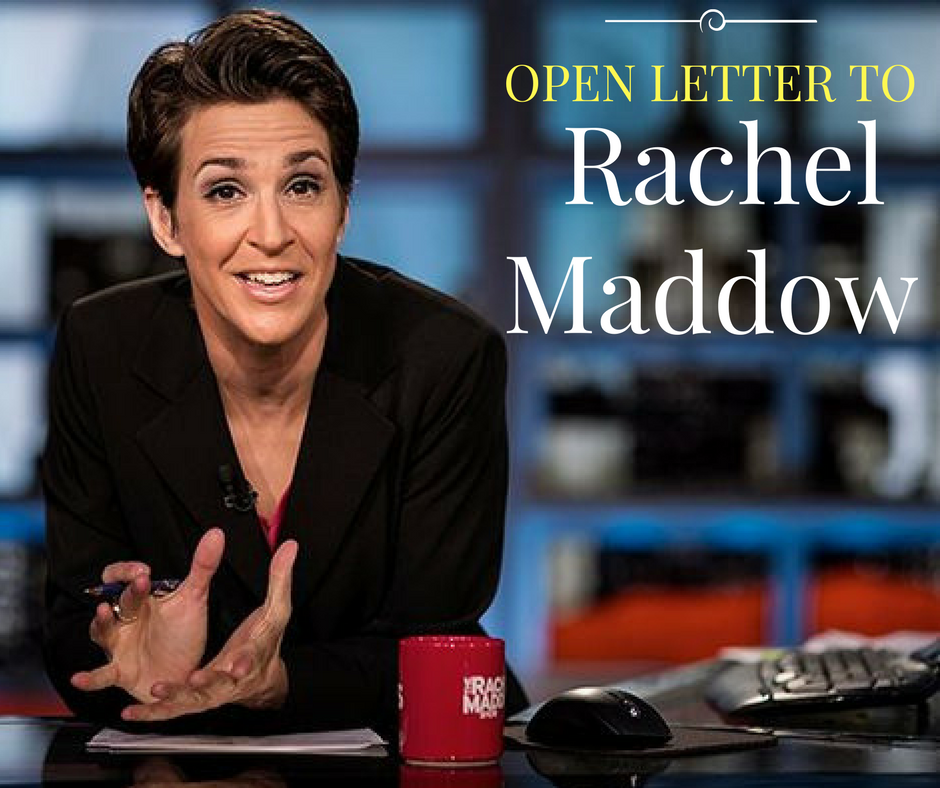 An Open Letter to Rachel Maddow

I write to you with great content and immense glee to express what you — as a charismatic political compere and a bold and vibrant media figure — mean to a liberal like me.

I preface this letter by saying it is not intended to reveal my personal affections towards you; similarly, it is neither meant to discuss your political ideologies and inclinations or critiquing your work as a primetime TV host. The purpose of this letter is to crystallize the model person that you are — in your professional and personal life — to me and many others, who look up to you as a role model, through the articulation of your characteristics. I attempt to do so by taking a complete, incisive look at you — peering deep into your character, recognising your underappreciated qualities, marvelling at your mesmerising work and plentiful achievements — and painting your fulsome picture unlike other open letters directed to you in the past.

To give you a quick background, it has barely been three years since I started following you and listening to your podcasts. I have hazy memories of how, on one fine evening back home from work after a tiring day in Melbourne (Australia), in seeking some intellectual enlightenment, I skimmed through some listicles of Top mobile apps on iOS with great content. Having been impressed with the frequency of the appearance of Stitcher, I felt compelled to download it. I also distinctly remember myself instantly searching for some high-brow podcasts on philosophy, online marketing, American politics, intimate personal stories among others. I recall giving an ear to quite a many shows in search of the crème de la crème, but no show had as great an instant impact on me as The Rachel Maddow Show did. Eventually, I did end up following The Moth Podcast and The Bill Maher show, but not as regularly as your show, and even then, yours took the cake by a mile, and in every possible regard. This was my introduction to you, when I wasn’t quite acquainted with you, your beliefs or political ideas.

To maintain a neutral stance, let’s hypothesize that other tangible factors swayed my loyalty (or lack thereof) initially in favor of your show; factors like the branding of the show (read: MSNBC, an offshoot of NBC), the glowing reviews of the podcast, the regularity of the episodes, their length and format (video & audio), availability/visibility across desktop and mobile phone etc. In reality though, none of them was a motivation enough for me to spend my precious time listening to a newscast, let alone a political newscast debating American politics (myself being an Indian living in Australia).

So then, you might ask me: what made me want to follow a news show on politics that I really had no tangible connection with (I do acknowledge though, that I am a fervent supporter of the U.S.A.)? To explain precisely, I will self-quote: “It is only when you take a stab at something new do you realise what you were missing all along”.

It’s your unique characteristic traits that make you and your show popular and so great. So, let me first shed light on you as a host and your hosting capabilities. To state simplistically, I will again self-quote: “As a TV show host, if you nail the hosting part, you win half the battle”. Being a host of a political show is a big responsibility. You have to be mindful of many things, the most important being not to bore the legions of viewers most of whom are not so keen on watching politics (which itself is an understatement), but only in its resulting consequences. The other things being: maintaining a neutral position no matter your partisanship towards a particular party; making genuine, valid arguments extemporaneously; not overstepping the obscure, fine line of political correctness; and getting one’s facts right. Apart from these, there are certain other intangible aspects that a host needs to be conscious of; they include: delivery of the speech, manner of explaining things, demeanor and body language. What struck me after hearing and seeing you host The Rachel Maddow Show (TRMS) is, I had never come across a host so lively, intellectual, knowledgable, capable and endowed with such a great flair (oratory or otherwise) and aura. Also, considering that you are the sole host of the show, this fact becomes even more apparent.

As fascinating as this revelation was, equally surprising was the follow up: I found the content of your show and your hosting incredibly captivating, and I got hooked on not long after I started listening to your podcasts. Rarely does anyone get enthralled by a news show, less so by political shows. From my view, you do an exceptional job of carrying the entire show on your shoulders successfully day in day out, while keeping more than a million people engaged in speaking about the most uninteresting and abstruse of topics. I admire the way you mix intelligent humor, interesting anecdotes, cold hard facts and sometime pop-culture references while generously peppering your talk with laughter to temper the boredom levels and make your show a wholesome political affair. I love that you recount all the major political stories and unfailingly highlight the important backstories behind those stories to explain their happenings. I wholeheartedly savor it when you narrate any historical stories of significance to draw comparisons or connections to politics of now in order to provide a historical context and to enhance the viewers’ understanding. I see you regularly take on the Republicans (cue Kellyanne Conway), and their backward-looking policies with the greatest of decorums, regardless of how disparaging they are to you. It fills me with immense joy to see you treat them the way you do, but I absolutely relish the moments when you point out their flaws and take them apart methodically. It resonates with me instantly when you use epithets like ‘My friend Gilmore’ and ‘Uncle Pat’ to speak about previously unknown politicians and personalities. I feel that a well-crafted show, your infectious charm and the fine balance that you so deftly maintain between solemness and lightheartedness sets TRMS apart from the hundreds of all too similar political shows. All in all, I find you to be a vivacious host with a fierce intelligence and never-ending wit.

I must also remark on your magnificent writing skills and your extremely well-researched novel Drift: The Unmooring of American Military Power. While I at once confess that I haven’t read the entire book, your persona (TV or otherwise) shines through brightly from the very first chapter of the book. Right from the minutiae that form the nuts and bolts of your book to your coherent and persuasive prose, every aspect of the book reads to me like a wise sage reciting his experience in earnest. To top that, you have taken head-on formerly undiscussed political policies and topics, talking boldly and exposing the covered up holes in the American military strategies of the past. Your use of arcane words, formally or informally, to describe subtle things, say something about your depth and range of knowledge. They also speak volumes of your stellar education and academic credentials: a Rhodes Scholar with a bachelor’s degree from Stanford University and a doctorate from Oxford University. Can anyone even come close to that? I don’t think so.

I talked about your all-important political newscasting till here and what makes me want to listen to you every weekday starting from Tuesday (since I live in Australia) for an hour. I stray slightly here, from your professional life to your personal life. While I accept it is not my place to comment on your personal life, any open letter would be incomplete without an annotation on your personal life and your accomplishments.

If the greatest thing that ever happened to the gay community in the media industry, then it’s undoubtedly Rachel Maddow. You have completely changed the way people think about lesbians, by not shying away from what you are as a person, accepting the consequences of being openly gay, and harnessing your position as an advocate of gay rights to bringing about a positive change and make it easier for people of your ilk. I can only imagine how difficult it would have been for you when you were starting out, especially when going against cliques with perversely antiquated mindsets like the Republicans. I cannot believe that despite all the money you have in the world, you have stayed firm on the ground and been with the woman you love for 17 years now. That shows your devotion, sanctity and longevity of love. And I also won’t forget the moment that your emotions came pouring out live when Donald Trump was declared the winner of the U.S presidential elections, which symbolised what a dismal state America had come to.

Well, before I let you on to the verse I penned, I must admit, I have great respect for you. I admire your qualities and wish I could make them my own. I also find you gorgeous in an unconventional way, for what you are as a person.

Here’s a verse that I dedicate to you, to what you are, to what you stand for and in recognition of your wonderful work and efforts to bring a positive change in this world:

I always regret that

There is no new TRMS episode to watch on Mondays

Even so, Tuesdays almost always end on a high note,

Thanks to cheerful “Happy Monday” greetings

By none other than Rachel Maddow.

It’s a great joy to watch

The ever so jolly, Ms. Maddow,

Equipped with a Ph.d in political science,

And a rich experience as a radio host,

Rachel Maddow goes about her job

As brave and fearless as she is,

She is unapologetically jovial –

Humor and laughter comes to her as easy

As air to vacuum

Always standing up for citizen’s rights

And supporting the right things,

She is unfazed by disparaging remarks

And unnerved by any criticism hurled her way;

Rachel’s never afraid to be what she truly is

And wear it proudly on her sleeve,

Instead of simply toeing the line

To pacify the powers that be.

She is a liberal at heart

And a Democrat by soul;

Republicans to her are her friendly foes

Who make her laugh deliriously

And also provide a useful fodder for her oft-hilarious show;

It goes without saying that

Rachel is really passionate about politics

And knows more about it

Than Republicans do about their policies;

She looks up to sensible liberals like Jon Stewart

While also acknowledging the rational views of Republicans,

And does her job with utmost gusto

To err on the side of prudence;

Of the same variety every other day

To save some time for her work;

Rachel is least bothered by fashion and clothes

And yet she has to put makeup and dapper clothes on

In front of the millions of people every week

As the face of the network;

And has an eclectic taste in music

Right from country music to the punkest of songs;

Rachel lives with her photographer partner

Who she loves to bits

Shuttling between her preffered, quaint house in Massachusetts

And her cozy apartment in glitzy Manhattan.

This open letter, may have —

Taken the form of an encomium,

But for a person of your calibre,

It is totally justified.

From your firmest of followers,

« Lion: Movie Review
What Do Millenials Think Of Marriage? One Millenial Speaks Up »